Slice of Life and Sharing Our Stories: From Languishing to Flourishing

When I read this article today "Those Blah Feelings Have a Common Name," in the Science Times section of the NYT, I immediately saw that I could create a diamante poem from the ideas presented in the article.  I could save this for Poetry Friday, but it's what popped up for today's slice of life. Our prompt for Sharing Our Stories last Thursday was aloud. I usually read poetry that I create aloud, but I'm looking forward to using this strategy with my narrative pieces as well.

Here's the formula for my antonym diamante poem:

It's the center point of the poem where the poem pivots to reflect the final word (an antonym for the first word).

Slice of Life: Come Stroll with Me!

Spring is my second favorite season

(after fall which I adore)!

It's been amost three weeks

since I've shared pics from my walks.

Come along for springtime color

and celebration of new life!

One of my favorite spots is this fence line. 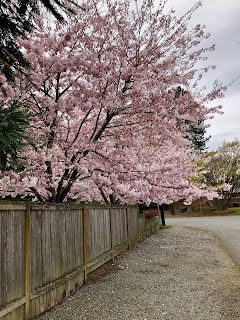 I can't resist a close-up shot 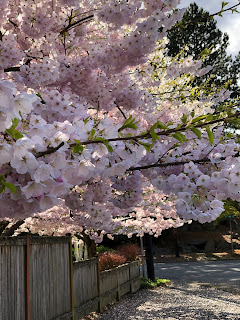 and a view from the other end on a sunnier day! 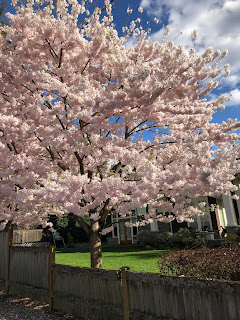 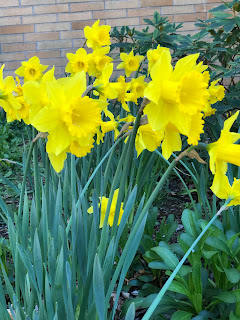 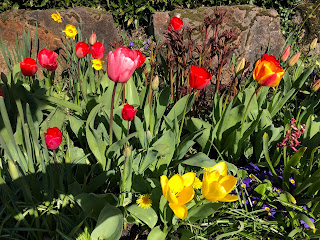 and tiny flowers and dandelions! 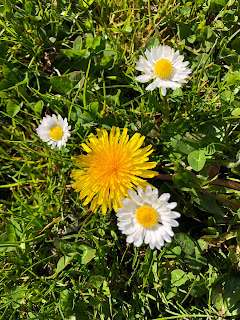 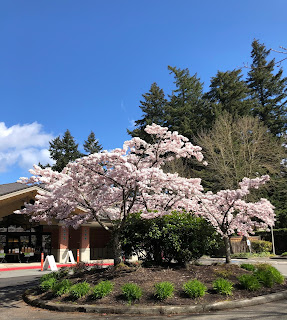 and sparkling blue frames a tree in white. 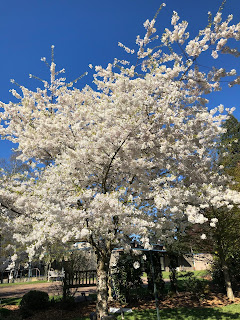 Heavy pink blooms call me up the hill 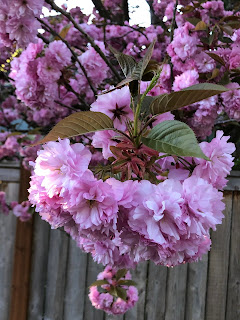 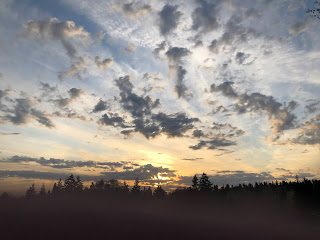 I've been mulling over my writing habits since Thursday's prompt for SOS arrived. When I awoke at 5 am, I decided to indulge in a couple of my favorite habits - sipping and meandering. For more than a few years, my Saturday morning habits included an early morning Weight Watchers class followed by a raspberry hot chocolate infused writing session at a nearby Starbucks before I tackled Saturday morning errands.

I tiptoe downstairs to make a cup of hot chocolate, plump the pillows, and settle in, laptop in lap for another favorite habit, meandering the posts of my writing buddies. I decide that I'll leave a comment on each post to the SOS prompt before beginning to write. I revel in the early morning songs of the birds, delight in my friends' exquisite word choices, and decide that my favorite writing habit is time spent in the company of my writing friends.

I often arrive with no thought or intention other than it's time to write a post. But after strolling through a few blog posts, I'm ready to write. So whether it's a favorite word (isn't dappled just the most delicious word?) that gets my creative juices flowing, or the poems posted by my Poetry Friday friends, or the sharing of a favorite book tucked into a story of hospitality, my meanderings lead me to discover something to share. And today it was my favorite writing habits: sipping, meandering, writing, and napping. Yes, the best part of an early morning writing session on Saturday is the chance to snuggle back under the covers for a few more winks before the day begins in earnest!

And here's a Saturday serendipity that popped up on my feed this morning: The Nine Habits to Increase Your Energy. Please excuse me while I indulge in Habit #3: 20 minute naps!

To savor the magic of story, link your post at Sharing Our Stories.
Posted by Ramona at 6:52 AM 8 comments:

Sharing Our Stories and Slice of Life: Going Home!

We moved to our first home in McAlester at 1011 North D Street in 1962, the summer before I started second grade. Just a year and a half later we moved two blocks away to 306 West Tyler, home for our family for the next twenty-eight years. I left this home to attend college, to live in Hong Kong while I served as a missionary, and to share an apartment just across town with my brother Karl. I returned to this home after my father's death and my brother's wedding in the summer of 1980. I was glad to spend the next two years with Mom, helping her adjust to life without my dad, her companion of almost forty years.  I left this house in the summer of 1982 when I married and was thrilled that I would be living just two hours away in Tulsa, an easy drive back to my hometown.

My easy two hour drive to my hometown became an almost seven hour drive when we moved to Houston in 1986. Sometimes I flew and sometimes I drove, but my children became familiar and acquainted with my hometown of McAlester, Oklahoma. Even after my mother died in 1991, we continued our visits because my brother and his family lived there. With our move to Washington in 1997, our road trips ended and we always arrived by air, frequently with a stayover at my BFF's home in Tulsa. I have always loved going to McAlester, my hometown, where I feel the closeness, the love, and the tug of home.

That has changed with the death of my brother in December and my sister-in-law's move to Stillwater to live closer to her son and family (and I understand). We've had members of our immediate family in our hometown for almost sixty years.

How do you go home when there's no home to visit? Well, my visits will be less frequent, but I'm sure that my trips to Oklahoma will occasionally include a stop in McAlester.  I still have a few friends, some extended family who live there, and so many family members at Oakhill. My parents, aunts and uncles, my grandparents, my great-grandparents and now my brother all have real estate at Oakhill Cemetery. I know lots of folks who no longer visit cemeteries, but I like going there and remembering the stories and basking in the memories of those I love. So I will be going home again, but I may have to stay in a hotel.

,It was Easter morning and we were watching the Sunday morning General Conference broadcast of The Church of Jesus Christ of Latter-day Saints. Pres. Russell M. Nelson had arranged for the speakers and music for this session of conference to represent our worldwide church. Midway through the morning session, Elder Dallin H. Oaks announced that choirs of women and children from around the world would sing a beloved song from our children's hymnbook, "I Am a Child of God."

However, my favorite group and star performer of the morning was not in the sneak-peek-before-performing collage. It was the largest group, three rows of boys and girls, beautifully attired. And our star performer? A little girl in a yellow dress, 2nd row, 4th from the right. She's not looking at the conductor. No, she's looking down stroking her pigtails (50:35) and watch for it . . . YES!!! Eight seconds into her group's performance, she grabs a pigtail and tucks it under her nose, mustache style! I could not keep from giggling. It was so refreshing to see a child acting just like a child!

This could so easily have been cut from the final take, but someone with a sense of humor, knew that we would all be amused by a little girl with a pigtail swished under her nose, playfully looking up at the camera. I can't help thinking about her and being grateful that someone saw to it that her antics made the final cut and brought comic relief to our Sunday morning conference session and smiles to me two days later.

It's a triple Thursday as I share a favorite quote, a golden shovel poem and some favorite pictures from recent spring walks for Spiritual Journey Thursday, Sharing Our Stories, and Poetry Friday. 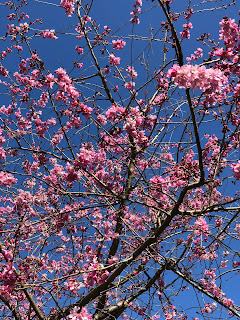 “Those who contemplate the beauty of the earth find reserves of strength that will endure as long as life lasts. There is something infinitely healing in the repeated refrains of nature -- the assurance that dawn comes after night, and spring after winter.” - Rachel Carson, Silent Spring 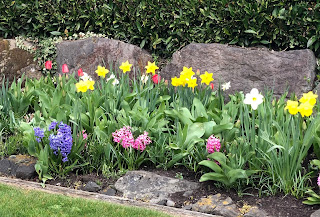 I chose this phrase "The flowers appear on the earth;..." from Song of Solomon 2:12 to create a golden shovel poem. Golden shovel poems are inspired by a line of poetry or text, constructed so that the ending word of each line when read top to bottom composes that line.

Awe fills my heart as the

and I remember sorrow turned to glory on

a blessed spring morning. An empty tomb reveals the

victory over death, the Savior's gift to all who live on earth. 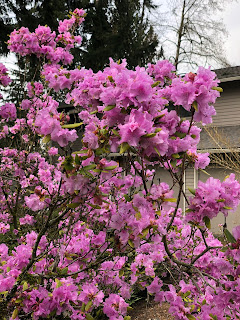 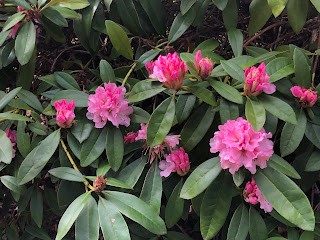 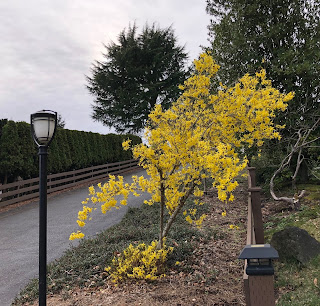 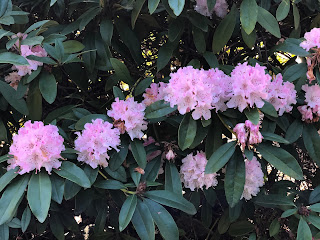 To savor the magic of story, link your post at Sharing Our Stories.
Posted by Ramona at 7:04 PM 24 comments: