Slice of Life: It's a Process!

Today was not a snow day in the traditional sense. Kids and teachers had to go to school. We had snow flurries all day, but not much accumulation. This retired teacher had a busier than usual day. Daughter came over to pull out the Christmas decorations. Our smaller home means less space. So it's only the "dearly loved" that make the cut. And I realize that more donations need to be made, even though I thought I'd done a good job downsizing the decorations before the move. I remind myself, "It's a process."

When the grand boys returned to their house, they played outside in the snow. Morning play was met with wet pants and underwear, so they opted for their snow gear for afternoon play. And then big brother came home from school and it was time for more snow play until it was dark. Just ask my daughter, "Playing in the snow (even when there isn't much of it) can be an all-day process." 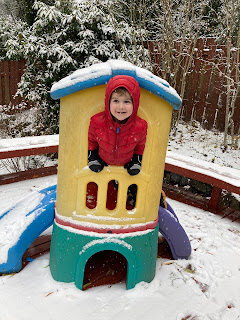 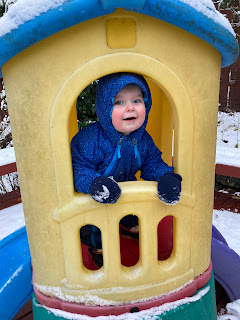 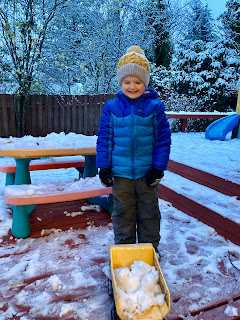 Tonight was book club. I didn't want to go out in the snow and several couldn't attend in person, so we opted for the pandemic model and had a Zoom book club meeting. It may not be optimal, but it allowed for the most participants to come. I'm getting to know a new group of book lovers in my new congregation. Making new friends is (you guessed it!) a process. But it's definitely easier with a shared interest.

I like making new discoveries at our new place. And today, I spied my own little Christmas tree in the back yard. It's been there all along, but it's a stand out star with a few flakes adorning its green needles. I'm learning to find the beauty in my new surroundings. "It's a process." 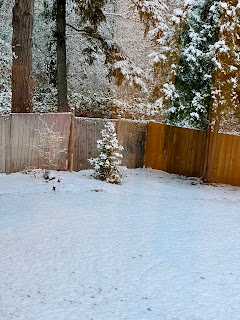