Today I join my fellow bloggers in "serving up a slice"
to the Tuesday Slice of Life sponsored by Two Writing Teachers. 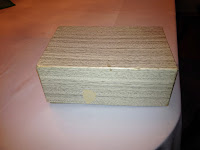 Inside this rather pedestrian cardboard box is a treasured family heirloom,
the Christmas angels! 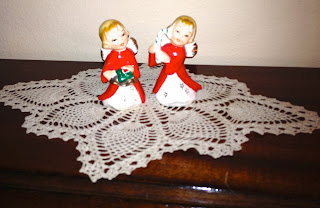 They are ceramic and made in Japan, but the real treasure is contemplating the hands that have touched and loved these angels for the past 50+ years.  They were given to Angie Wyrill, my husband's grandmother, by her daughter Dorothy Behnke, my husband's mother, many years ago.  Angie's home was often filled with family and friends.  Our visits there were precious times as we gathered around her kitchen table to enjoy good food, stories, and laughter.

When Dorothy gave us the angels in the early 90's after Angie's death in 1990 at the age of 93, they became part of our family's Christmas traditions.  Each year, the angels are unwrapped tenderly (still  surrounded by the tissue paper and kleenex lovingly put there by Grandma Wyrill) and placed in a safe place for the holidays.  A favorite spot was the top of my secretary until I spied our cat Hadley snuggling with the angels one year.  After a few years in safer spots, they returned to the secretary this year since Hadley's advancing age limits her ability to climb. 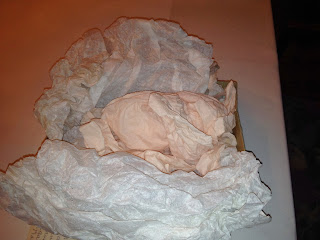 In the bottom of the box under the kleenex and tissue paper, is the real treasure, handwritten notes penned by Grandma in 1960, 1967, 1972, 1974, and 1977, on the day she packed the angels away and placed them in the attic until the next Christmas.
. 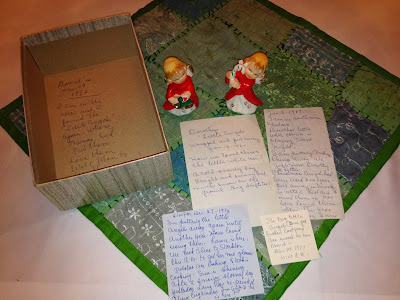 The notes often mention the weather, an ever present concern for the wife of a Kansas farmer.  The 1960 note ends with these words:  "A cold snowy day.  Bright and sunny but much snow on the ground.  Big drifts too!"

The 1972 note:  "Little angels put away Dec. 28 -72.  Kept them on John's desk and enjoyed seeing them each day.  Now it is 2:30 p.m.  Ex-President Truman's memorial service is in progress."
The words "kept them on John's desk" are especially poignant because her husband John died in 1971.

The 1974 note is my favorite because it mentions a visit from Lance (her grandson and my future husband), and ends with the words: "I'm GLAD he is here!"  The word glad is underlined twice. 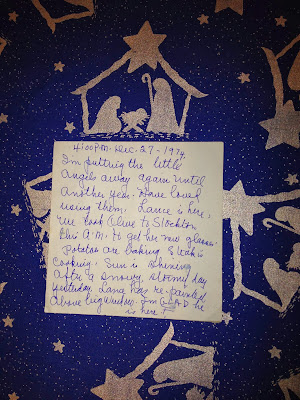 Each year when the angels are unpacked, I reread these notes along with the ones penned by me beginning in 1992 and Sara's notes beginning in 2007.  They chronicle our Christmases in Houston and Seattle and mention activities and guests who visited during the holiday season. 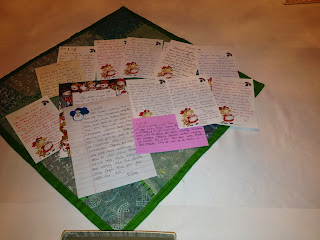 Sara's first addition to the notes was in January 1996 when she was nine years old.  She added the date at the top since Grandma always included the date and added these words to the end of my note - "We loved Christmas this year."  The last note written by me was in January 2005, Sara's senior year in high school.  After leaving for college, part of Sara's visit home each year has included penning the note for the Christmas angel box. This year, I'll add the note since Sara's and Will's move to NY (grad school for Will and full-time employment for Sara) prevented a visit home during the holiday season.


Borrowing a phrase from Anita's eloquent post about a family tradition,
I tenderly tuck the angels into their box empowered by memories and the love of family from Christmases past, Christmases present, and Christmases yet to come.
Posted by Ramona at 11:56 AM