I'm attempting to write 52 stories from my life during the year 2020. One story a week, in no particular order, to remember and document some of the memories of my life. This week's precious photo was taken almost ten years before I was born. 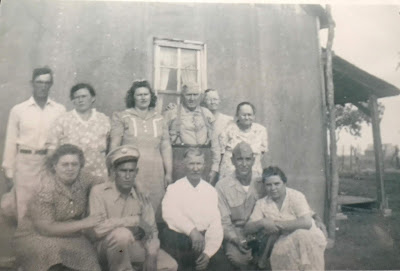 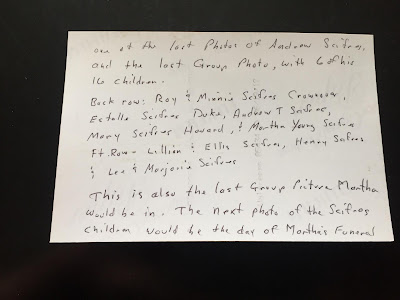 This is the last photo of my grandfather, Andrew T. Scifres, in 1945 with six of his sixteen children. I'm grateful for the words on the back of the photo which I'm assuming were written by my dad's sister, Estelle Duke:

This is also the last group picture Martha would be in. The next photo of the Scifres children would be the day of Martha's funeral.

Many of the pictures we have of my dad's family were given to us by our cousin Bill Duke, Aunt Estelle's son. Aunt Estelle and Bill are both deceased so we are grateful that Bill, an only child, made copies and shared his pictures with us.

When I look at this picture, I have several questions and two wishes:

When was the picture taken? Since my father did not arrive home from Germany (where he had been a prisoner of war) until May 19, 1945, the picture would have been taken sometime between that date and June 14, 1945, the date of my grandfather's death.

Who took the picture? I'm clueless here, although I've been told that Aunt Marjorie (Uncle Lee's wife) had a camera and took many of the family photos we have. Maybe the picture was taken by one of Aunt Minnie's children.

Is that Grandma and Grandpa's home in the background? I'm hoping that some of Aunt Minnie's children can answer this question for me.

My wish that we could have seen more of Aunt Mary is something I will have to remember every time I try to position myself at the back of a photo. This head shot leaves me without a clear picture of my dad's sister, Mary, on this occasion. But I have many memories of my Aunt Mary who lived in Ada, Oklahoma. Our yearly trips to the Scifres reunion always included a stop in Ada to see Aunt Mary, whose health in her later years prevented her from attending the reunion.

I wish we had a picture of the grand kids present on this occasion. Taking photos was a costly endeavor, so maybe that's why there is no picture of the grand kids or maybe they were out playing and it would have been too hard to round them up. My oldest sister, Velma, was three years old when this photo was taken, and the only one of my three siblings that were born at this time.

Finally, I like thinking about the ages of the people in the photo when it was taken:
* Uncle Henry and Aunt Mary were the children of Andrew T. and Sarah Anlin Smith Scifres (Grandpa's first wife)

I like thinking of the joy present at this family gathering which may have been the first time my grandparents saw Lee (my uncle) and Ellis (my dad), after their return home from service in World War II. My Uncle Elbert also served in World War II. He's present in the pictures taken at my grandmother's funeral, Martha Ada Young Scifres, who died on June 19, 1945 (five days after her husband, Andrew T.'s death). I wonder if Uncle Elbert  saw his parents before their funerals. And how grievous for these three boys who survived the war to lose both their parents so soon after the end of the war and their return home.

Even though I wasn't born until ten years after this picture was taken, it's a cherished piece of family history. I look forward to hearing from some of my first cousins, Aunt Minnie's children, who may be able to tell me more about this family gathering.
Posted by Ramona at 5:29 AM