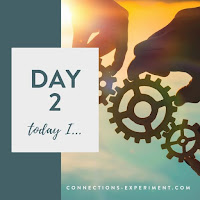 In May I participated in my first Family Connections Experiment. It was a joy-filled time of learning and sharing. And so, when a new 21 Day Experiment for Family History Month in October was developed, I knew I was on board. This time I'm working on posting and tagging pictures to Family Search. And sometimes I'll write a post about the picture as part of my #52Stories project for 2020.

This photo of my father and his siblings was taken in June 1945 after the funeral of his mother, Martha Ada Young Scifres. If you look closely, you can see that the pictures of my Aunt Cordie on the left and my Aunt Estelle on the right were added to this family group after the original picture was taken. I think they were photo shopping before their time! Actually, the purpose of inserting those two pictures was to have a group photo of the adult children of my grandfather, Andrew T. Scifres, his first wife, Sarah Smith, and Martha Ada Young, my grandmother. The thing that always seemed a little eerie was that my Aunt Cordie (on the far left) died in 1942, three years before my grandmother's death when this picture was taken. Aunt Estelle, on the far right, was hospitalized at the time of her mother's funeral. 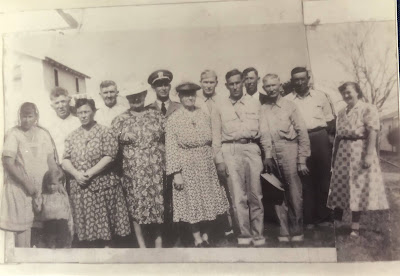 And now it's time to identify my paternal aunts and uncles in this picture.

Things I've noticed and remembered while identifying my relatives in this picture:

For more information about my grandfather, Andrew Thomas Scifres, see this post:

For more information about my grandmother, Martha Ada Young (who died ten years before I was born), see this post:

The last photo of my grandparents, taken with six of their sixteen children:

As I've collected these posts about my grandparents written for my #52Stories project, I've realized that some of the photos haven't been saved to Family Search memories. So, my posting and tagging of photos for Family Search continues. I'm also planning to create a Facebook group for the descendants of my grandfather, Andrew Thomas Scifres.