When the year 2020 dawned, I had travel plans! After a trip to Utah at the end of February to visit Blake's family and attend the Roots Tech 2020 Conference, I had big plans for March which included a trip to OK and TX to visit my brother and family, a college roommate, my niece, and Crownover cousins I hadn't seen for almost forty years.

But the biggest disappointment when this trip was cancelled was missing out on seeing my brother, Karl. We're two and a half years apart in age and just two years apart in school. He was my chauffeur in high school, so much so that I didn't feel a need for awhile to get my driver's license since he was willing to take me anywhere I needed or wanted to go.

A few years into our young adult years, Karl was transferred to our hometown in 1979 as the manager of the Zales Jewelry store. He asked me to look for an apartment for him. I called and told him I'd found a two bedroom apartment and asked if he'd considered having a roommate. He asked, "Who would be my roommate?"

I was living at home and teaching and the thought of getting out on my own was certainly appealing, especially with a roommate that I already knew. And thus began our almost one year of sharing an apartment together. We were spoiled by our parents. I think they were so glad to have both of us in town! We'd go over and start our laundry and mom would finish it for us. Then Dad would deliver it to our apartment. He always had a big grin on his face to accompany his knock as he called out, "Laundry delivery." Those are memories I cherish because our dad died in the summer of 1980. I moved home to be with mom and Karl married the love of his life, Kathy.

I had become so accustomed to sharing my day with my brother that I developed a new tradition. I stopped by Zales on my way home from teaching at Parker Middle School so we could chat with each other. That way I wasn't tying up his evening time with Kathy. If he was busy with a customer, I just waited until he was free.

Karl has lived in our hometown for more than four decades. He left Zales and went to work as Small Business Coordinator at Kiamichi Area Vocational Technical School where he spent 31 years of his career. He raised his two children there, was a member of many community organizations, served as bishop in our church, and even served on the school board. Karl is one of those people who knows everyone. I always joke that being with Karl in our hometown is like being with Miss America. It seems like he's just waving to the crowd as he walks down the street. Everyone knows him, calls him by name and loves to chat with him.

I love seeing my brother and chatting with him too! And I've had to be content with just telephone calls for almost two years now. And now the occasional Zoom call too. I'm not sure how I missed seeing him in 2019. That's the year I went to Italy with friends and a new grandson arrived. Even when I served a mission for the church and was gone for a year and a half, I left in the middle of 1977 and returned in December of 1978. This is the only time I've marked two consecutive calendar years without seeing Karl.

On our last visit together in November and December of 2018, we watched Hallmark movies and talked and talked. It was just after Thanksgiving. He was on a very restricted diet, but true to his always happy manner, he didn't complain. I was trying to help him sort out some difficult health matters, but mostly I was there to be with my brother.

I'm still sad that our visit for March 2020 was cancelled! And guess where I'm going first when we can travel again? In the meantime, I call him most days and we chat and laugh and enjoy our time together. I'm so lucky to have a brother who is also my good friend! 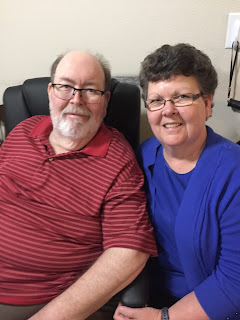