Join me on my writing journey each week as I post to the Tuesday Slice of Life sponsored by Stacy and Ruth from Two Writing Teachers. 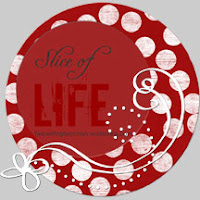 Today I'm thankful for my citizenship in the United States of America and the opportunity to vote.  I have so many memories of election day!
My childhood home in Oklahoma was a polling place for many years, and preparations for election day began many days in advance of the election.  Dad always brought the plywood voting dividers down from the attic, Mom cleaned and cooked frantically, then went to the courthouse to pick up ballots and required materials, the flag was hung from the front porch, the required number of workers arrived to staff the election, and then neighbors arrived to vote.  My mom provided a pot of soup or beans simmering on the stove for the workers.  She took her job as judge quite seriously, and more than once chased away folks who were handing out campaign literature too close to the polling place, and even advised husbands that wives should be allowed to vote in private.  She didn't like it when men told their wives how to vote.  I believe I may have inherited some of her independent nature.
In Washington all votes are now cast by mail-in ballot.  I miss chatting with neighbors as I stand in line, looking for my name in the big book, signing on the dotted line signifying I was there to cast my vote, and proudly wearing the "I voted" sticker.  I remember many polling places.  One very vivid memory was standing in line outside a small residence in Stillwater, OK to vote in my first presidential election in 1976.  Polling places were often my children's elementary schools (Roberts in Houston and West Mercer on Mercer Island).   I frequently took my children with me to vote so I could share this important process with them and sneak in a mini civics lesson.
Our modern age of convenient mail-in ballots leaves me feeling oddly disconnected from the sense of shared community and patriotism that I felt when I cast my ballot in person at the polling place.
What memories come to your mind when you think of election day?
Posted by Ramona at 9:20 PM