Slice of Life: Never Too Old to Learn Something New

September, even when you're retired, is an awakening time of year. One of my rituals with my students was a weekly word of the week. Students loved reporting back as they saw and heard the word of the week on social media, in movies, in another teacher's classroom, or spoken by their soccer coaches. Something about becoming aware led to noticing which led to cementing that learning.

When we finished the last season of "Vera", we started the series "Shetland" (recommended to us by a friend who also liked "Vera"). I asked my husband where the Shetland Islands were and he told me north of Scotland. I could have just googled them, but instead I went to our large atlas and found them. There's something very satisfying about using an atlas that google can never replace. 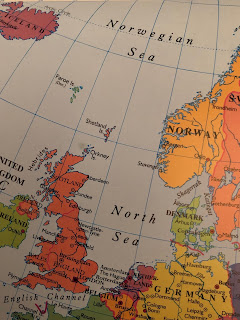 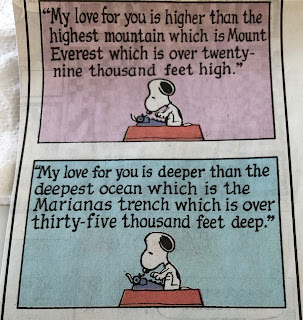 Moments later I was surprised to see these facts reinforced in the "Ask Marilyn" column of the Parade magazine under the question "How high is Mount Everest?"

"Imagine yourself on a plane in mid-flight. A common sustained altitude is about 35,000 feet. You know how that looks from a window seat. Well, the peak of Mount Everest is about 29,000 feet. So if you flew right over it, the summit of the mountain—complete with any climbers—would be only a mile or so beneath you!

By the way, the deepest part of the ocean (the Mariana Trench in the western Pacific) is about 36,000 feet from the floor to the surface. Imagine that!"

I don't know about you, but I had never heard of the Mariana Trench before (or if I had... I've forgotten, but that's a post for another week).

Which just goes to show that you're never too old to keep learning and you never know where you'll find your next new learning. You don't have to be in a classroom - your favorite TV series, or a comic, or a column in the Parade magazine can be sources for learning. Now get out there and learn something new this week!
Posted by Ramona at 9:06 AM