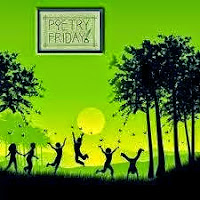 Head over to Carol's blog,
Carol's Corner, for this week's
round-up of poetic goodness.
She's introducing us to Tracy Smith,
our newest Poet Laureate of the United States.
Thanks, Carol, for hosting this week!

Thanks to Poetry Almanac, I learned that yesterday was the birthday of Issa.  "It's the birthday of Japanese poet Kobayashi Issa, born in Kashiwabara, Japan (1763). He’s one of the masters of the Japanese form of poetry called haiku, which uses 17 Japanese characters broken into three distinct units. He spent most of his adult life traveling around Japan, writing haiku, keeping a travel diary, and visiting shrines and temples across the country. By the end of his life, he had written over 20,000 haiku celebrating the small wonders of everyday life. He’s a big reason haiku became so popular in Japan and around the world."

When I clicked on the Poetry Foundation link, I learned a bit about the sorrow that permeated this poet's life.  This picture book, Cool Melons-Turn to Frogs!  The Life and Poems of Issa, is perfect for introducing children to haiku and this revered master of the form. 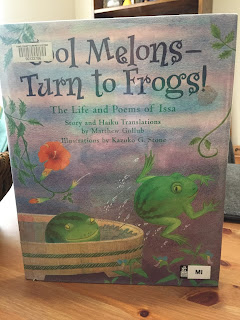 Here's a favorite haiku from the book:
"A child intent
on plucking jewels
of dew in the morning grass."
- Issa

That haiku probably inspired this haiku that I composed in my head  while Jack took his morning bottle.

Be sure to read the back notes in the book, especially the section About Haiku provided by the author.
Posted by Ramona at 11:16 AM