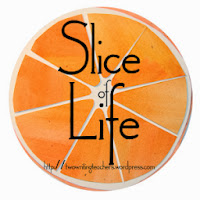 Thanks to Stacey, Betsy, Beth, Kathleen,
Deb, Melanie, Lanny, and Kelsey
for hosting this meeting place each Tuesday
and nurturing our writing lives.

It all started with a book! And I don't remember which one, but after finishing it, we went in search of a hat because someone in the book was wearing a hat. Jack has never really liked hats, but I want this to change because he's quite fair and needs protection from the sun.

We rummaged around in the front closet until we found his winter hat. We put it on and he wore it for a bit.  Then we tried on his summer hat. It immediately came off. (It's one of those fabric bucket hats, defintely uncool.) I decided that he needed a baseball cap.

So when my daughter and I went to the outlet mall for some pre-birthday fun (my birthday, not Jack's), a baseball cap was on the list. I purchased the last cap on the rack at Carter's. When we got home, I had Grandpa put on his baseball cap. And then we went to the mirror so we could admire Jack and Grandpa in their caps. And to everyone's surprise, Jack left his cap on while he played. 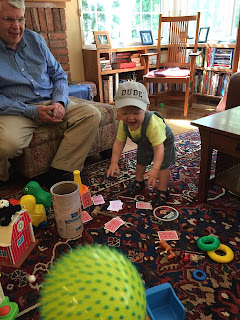 We wore it to story hour last week. And here's a pic of Jack playing with Uncle John last week, sporting his baseball cap. 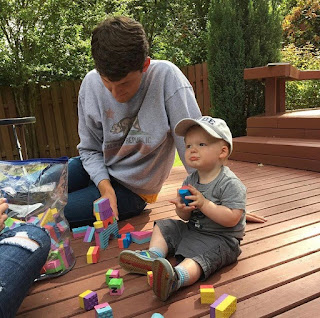 I think, at least for now, Mister Jack has acquired a new habit.
Posted by Ramona at 6:35 AM