Those tentacles continued to swirl for sixth grade students from rooms 103 and 104 as they joined Janet Wong on Friday for a poetry workshop.  We learned about her journey from practicing lawyer to published author. 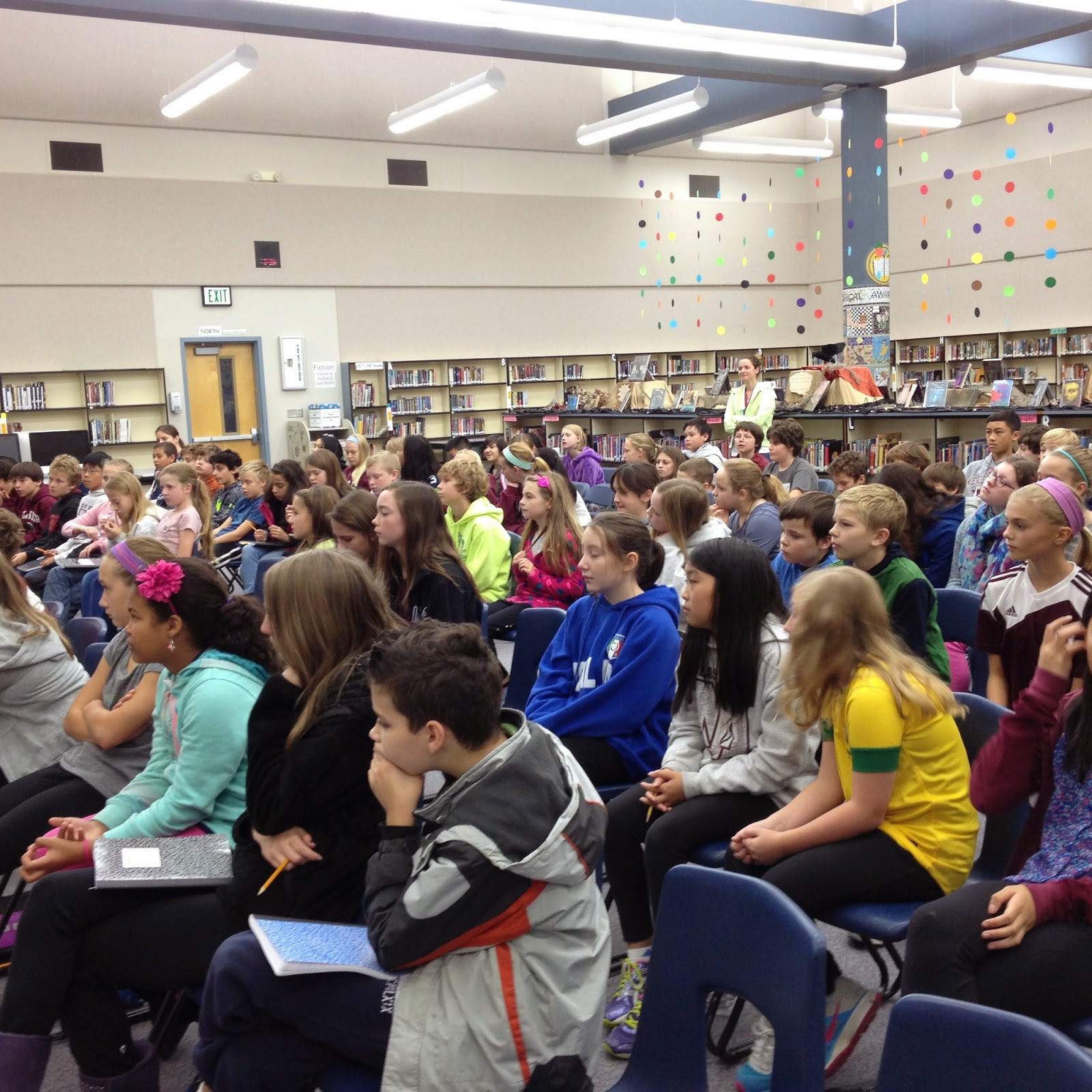 We listened as she shared these nuggets about writing poems:
"Little bits and pieces of my life find their way into my poems."
"The best poems are about specific things that are universal."

We examined poetry from The Poetry Friday Anthology for Middle School compiled by Sylvia Vardell and Janet Wong, our presenter.  Janet led us in an exercise for writing new endings to poems with this important question:
"What do you notice?"
Does the poem rhyme or is it free verse?
Does it follow a specific pattern for rhyming words?
Do the stanzas (little rooms to group ideas) provide a pattern for the poem?
Does the poem follow a specific rhythm?
Does the poem provide a predictable scheme?

And then we took out our writer's notebooks and wrote new endings for the narrative poem "Cod" by Holly Thompson.  Listen to Holly's multimedia reading of "Cod" that she created as part of a multimedia unit in this post (it's the second video).


Janet asked us to write a new ending for the poem after this stanza:

"but late afternoon on her walk with the babies
when she strolled past a bar where the captain
sat laughing and from the pier looked down
to the floating dock and the tub full of fish
her cod on top sun bathed and rotting
its dim, milky eye focused on her, she realized"

It was amazing to watch her create three different endings for the poem (a poem selected from The Poetry Friday Anthology for Middle School when a student called out a random page number).  She penned her stanzas on chart paper, revising on the spot with scratch outs and added words:

Version 1:
"she knew it was not enough
to catch the fish,
but she needed somehow
to capture the heart of the captain too.
She walked into the bar,
a baby in each arm, and said,
'captain, the fish you're going to fillet for me
will fill these babies up tonight
they thank you too'"

Version 2:
"she decided to fillet the fish herself
how hard could it be to take out some guts and bone
and she climbed down on the dock,
hoisted it up,
stuffed it like a pillow
alongside the babies
and rolled her cargo home"

Version 3:
"she cried, just sat and cried
so helpless, so hurt
and the babies knew exactly how she felt"

My version, with Janet's final advice to add three new words, (now deleted per Janet's advice in the comments):
"with a sudden stab of sad remorse
she wished to turn
back time and return
the cod to his watery primeval home"

Our time together was splendidly capped off by these new endings shared by several student writers:

from Peyton -
"hey captain
didn't you say you would
filet my fish
today?"

from Bella -
"one day not far
from now she would return
the favor to the poor, helpless,
rotting cod

from Jamisen
"as she passed the bar
the captain saw her flaw
he left the room
with dreary eyes he walked away
'goodbye,' he said
as he disappeared"

from Xander -
"to throw him overboard
look at him, monster eyed
I looked down below
and I saw how he died"

Our efforts at rewriting took just a few minutes, but Janet's workshop gave us new strategies for writing endings for the poems in the Poetry Box and for continuing our journey as poets.
A big thank you to Holly Thompson for permission to include the link to her multimedia reading of "Cod" from her blog and to share our new endings for her poem.  Holly's extensive website explores her intercultural world and the writing that has emerged from living abroad for the past twenty years.  While she is usually based in Japan, she is living in the United States (Massachusetts) for the 2014-15 school year and loves to do school visits.  I can't wait to read her verse novel (one of my favorite genres), The Language Inside which was a Notable Book for a Global Society last year and was highly recommended by Janet Wong.