I've been home for two weeks. It's past time to start writing and remembering. I took a small notebook for writing. And only wrote in it twice, on the way to Atlanta and then again on the way to Rome. 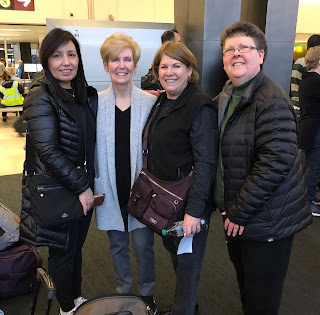 Here we are on Friday morning, ready to depart for Atlanta and then Rome!

First day in Rome was Saturday and we spent the morning at the airport because our group of four arrived hours aheadof the larger contingent flying from Salt Lake. You know the feeling, it's early morning at your destination, but your body knows it's really the middle of the night and you just spent nine hours on an airplane (and five more hours before that).

We waited near our baggage claim knowing that our tour director had already arrived and thinking someone would come claim the four of us. Complicating matters was that Teri was suffering from motion sickness, something she'd never encountered before. So every time we moved, we were concerned about her and hauling her luggage to the next place where we'd sit again and try to puzzle out what to do.


We even remembered that couple we'd met on the plane, also bound for the same tour group. Where had they gone? As noon time approached, I panicked when I couldn't find the other group's flight number on the arriving flight boards and finally checked in at an information booth where I learned that their flight was arriving in a different terminal because they'd had a connecting flight in Amsterdam.

I led our group of four out of the terminal to another terminal where I thought we could observe the rest of our group arriving, but then
we received a phone call from the tour director who was looking for us. So back to the original terminal and upstairs where we discovered about a dozen early arrivals and our tour director. Turns out they had been worried about us. Guess what? We had been worried about us too!
Posted by Ramona at 6:38 AM