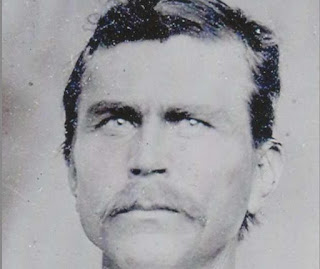 Meet George Washington Aaron, my 2nd great grandfather whose 170th birthday is February 29th. Born in 1852 in Alabama, he married Mary Elizabeth Harrison Cox, a widow six years his senior with three small sons. Having been educated in Nashville, Mary taught George in the evenings how to read and write and they fell in love and were married in 1872 in Florence, Lauderdale, Alabama. They had two girls and three boys. One of the girls died in infancy, but the other daughter, Caroline Elizabeth, was my great grandmother. I trace my heritage as a member of The Church of Jesus Christ of Latter-day Saints to my great great grandparents, George and Mary, who heard the gospel from missionaries in Alabama and joined the church in 1886. George died in 1926 at 74 years of age in Canadian, Pittsburg, Oklahoma. His home was in McNally Flat where my great grandparents and grandparents also resided. #ancestorofthemonth #moderngenealogy (My IG & FB spotlight for February)

One of my current passions as a retired educator is family history. I'm choosing that as my focus for this monthly challenge of daily slicing. Each month I spotlight an ancestor on Instagram and Facebook. Today I'll share a bit more about George Washington Aaron, my 2nd great grandfather. He was the 9th of 13 children born to James William Philyaw Aaron and Elizabeth Ann Butler in Elyton, Jefferson, Alabama. Of those 12 siblings, only one died in infancy. However, just 3 of the 13 children lived to see the 20th century: Virginia Caroline Aaron who died in 1901 at 60 years of age, George Washington Aaron who died in 1926 at 74 years of age, and Cleo Patrick Tobe Aaron, born in 1863 (during the Civil War) who died in 1959 at the age of 96.

Birth and census records indicate that George and Mary lived in Florence, Lauderdale, Alabama after their marriage where three of their children were born including my great grandmother, Caroline Elizabeth Aaron. Their next two children were born in El Paso, White, Arkansas. George's mother, Elizabeth Ann Butler died in Dulaney, Hunt, Texas in 1895. 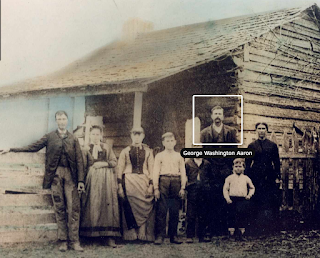 George and family were living in Celeste, Hunt, Texas in 1900. By the 1910 census, they had relocated to McNally Flats, Blocker, Pittsburg, Oklahoma where they remained until their deaths. George Washington Aaron's wife, Mary Elizabeth, died in May 1926 at the age of 80 and her husband died 6 months later at the age of 74. 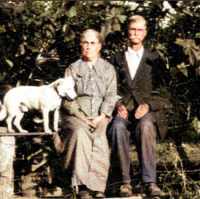 No color photos when this was
taken! I just like playing around
with the colorization feature on
MyHeritage.
Posted by Ramona at 2:17 PM