Each month I'm selecting an ancestor to get to know better. When I received a notice yesterday of the wedding anniversary of my great-grandparents, Nora Elizabeth Brock and William Pete "Buck" Young, I knew I'd found my ancestor for March.

Nora Elizabeth Brock, my great-grandmother (mother of my grandmother, Martha Ada Young), was born in 1837 in Smithville, DeKalb, Tennessee. She was the 4th child of eight children born to David Brock and Dameris Capshaw in Tennessee. Her parents were both born in North Carolina. John Capshaw, my 6th great-grandfather,  was born in St. Mary's County, Maryland in 1694.

Nora married William Pete "Buck" Young 163 years ago on March 21, 1859.  Nora was twenty-two when she married William in Smithville, DeKalb, Tennessee. William was thirty-seven, a widower with four children whose first wife had died in 1857. Nora and William had thirteen children. My grandmother, Martha Ada Young, was the 11th child born. When Nora was 42, she lost both of her parents. Nora still lived in Tennessee  and was only 48 years old  when William died in 1886. The new century was not an easy time for Nora. Her 12th and 13th children, Ennis (25) and Isaac (24), died in 1902 and Mary (38) died in 1908. Nora died in 1909 in Chisholm, Rockwall, Texas at 71 years of age.

All the pictures we have of Nora Elizabeth Brock feature her with a covering over one side of her face. This note of explanation is attached on FamilySearch: "Most known photos of Nora show her with the right side of her face covered with a hood or scarf. It was originally believed that her face was disfigured due to a burn or perhaps a stroke. However, Bill Duke, descendant of Nora, reports that it was an eye condition known as 'granulated sore eye' which causes pain due to light sensitivity. This photo was found inside an interior wall by Runelle Young Milby during a renovation of a family home near Royse City, TX. The photo was severely damaged and has been restored." 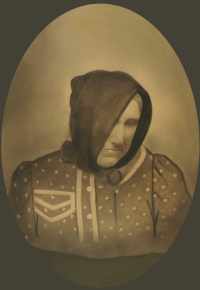 This photo features William Pete Buck Young on the left with Nora Elizabeth Brock on the right with perhaps a daughter and two grandchildren in the center. (It's really important to label our photos.)