My one little word for 2022 is "clear.". With the year almost 1/4 over, I realize it’s time to pick up the pace. Sometimes I plan a specific clearing project and sometimes one chooses me. That’s what happened when I was digging around in a kitchen drawer and decided it was time to deep clean.

It's one of those odd drawers that becomes a catch-all drawer (AKA - junk drawer). But there are several things with a permanent home in the drawer. There’s a box for stashing gum when I find it on sale. There’s Ollie’s food: a pouch of banana squash, two packages of banana peach Teethers (Num Nums) and the guilty culprit, a baggie of fine baby oatmeal, which became unsealed and led to the necessity of cleaning out this drawer

I probably pulled fifteen pens and pencils out of the drawer, each one with fine flakes of oatmeal baby cereal coating them, seemingly magnetized to the writing utensils.

I pulled out the weekly grocery ads and my stack of xeroxed shopping lists.

I pulled out a leatherbound WW journal only 1/4 used and actually threw it away. Good for me!

I pulled out several spoon rests. I guess I have another collection here. My favorite, blue and yellow from Sorrento, Italy, exudes memories of gelato, bright ceramic shops, shopfronts filled with leather purses, and hot chocolate in Florence (where Nancy flirted with our handsome waiter). I had forgotten about my bunny spoon rest, so perfect for this season. I replaced the Sorrento spoon rest with the bunny one.

I reached into the far corner of the drawer for the most important item in the drawer. A long time ago, perhaps a decade or so, I discovered an unusual Cheerio. My son consumed many Cheerios during his growing up years, but never had I seen a Cheerio like this one!  I've kept it all this time, in a plastic baggie. Only this month, it morphed into a collection.

It was a regular Friday morning with three of our grand boys gathered around the kitchen table for breakfast. Jack discovered the “funny” Cheerio and called me over to see it, which of course led to my telling the story of my very unusual cheerio and retrieving it from aforementioned kitchen drawer for all to see. And then I asked if he would allow me to add his cheerio to mine, thus beginning my unusual Cheerios collection of two. 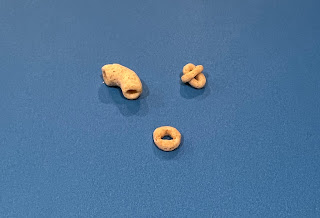 Admit it. You were hoping for a picture, weren't you?

My slice of two Cheerios is my latest contribution to my countdown to the end of this challenge. We have two days until we finish the 2022 March Slice of Life Challenge. See you tomorrow for the all important final post! This is my eleventh year of participating in the challenge. This year I'll be mining my memories (some of the time) for stories to share. 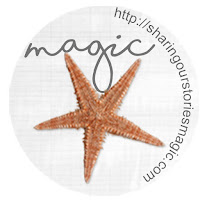 Joining my friends at Sharing Our Stories
with this question, "Does acquiring two of
something constitute a collection?"
Posted by Ramona at 10:00 PM