Join us each weekend for Celebrate This Week with Ruth Ayres.

When we pause to celebrate, we find the joy.

A week filled with moments to celebrate and remember.

Each week I join Ruth Ayres and a few friends
to celebrate the week and to focus
on the positive things that happened in the past week.

My weekly Celebrate This Week posts have morphed into a kind of digital scrapbook that includes looking back over my week with
pictures of things I've loved (nature, books, grandsons, to name a few). But this week, I'm focusing on an event we attended Saturday evening at UW's Meany Theater. We knew when we saw it last year in the seasonal brochure that we wanted to include this special event in our subscription renewal.

I didn't know too much about the program, Underground Railroad: A Spiritual Journey, but I knew I wanted to hear Soprano Kathleen Battle. She was accompanied by Joel A. Martin. This evening of traditional spirituals interspersed with narration and poetry from the works of Frederick Douglass, Harriet Tubman, Robert Hayden, and Dr. Charles Blockson was truly an evening to remember! The three narrators, Joyce Matthews, Karen Fraser, and Marion George, added so much with their readings. Kathleen Battle was joined by local choirs, The Sound of the Northwest and UW Chamber Singers.

Ms. Battle was adamant about the no photos rule, even going so far to shame a few audience members. However, I wish I could show you a picture of her in her black dress and shimmering pink fabric shawl. Maybe something will come out in the paper.

Some of my favorites from the evening included "Wade in the Water," "Swing Low, Sweet Chariot," "Hold On" and "Gospel Train." However, every number was luminous and added to the journey undertaken and explained in this quote from Frederick Douglass:  "I have sometimes thought that the mere hearing of those songs would do more to impress some minds with the horrible character of slavery, than the reading of whole volumes of philosophy on the subject could do."

I concur with the Meany Theatre ticket site which described Ms. Battle with these words: "... what distinguishes her most is her almost magical ability to create an unwavering bond with her audience." When the last number on the program concluded, the audience was invited to join in singing "Lift Every Voice and Sing." Encore numbers by Ms. Battle included a moving a cappella rendition of "Were You There?" followed by "Little David, Play on Your Harp,"a number that Ms. Battle claimed she and the choir had just thrown together (which may have accounted for our 20 minute late start to the concert). And then we reluctantly left our seats for home. 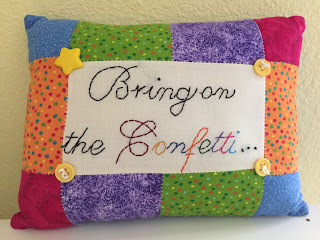 National Poetry Month 2018"Give praise with friends near and far,flinging words to the sky!"- Amy Ludwig VanDerwater