It's not unusual for my slices to be inspired by other slices I read. I've read about Beatles love shared with a new generation, porch rails filled with family memories, and school desks that are serving today's grand kids as they attend virtual school. But the one that brought a smile to my face was the slice about clackers and tape recorders. Now I don't know when the clacker craze originated, but I do know there was a resurgence in the 21st century and they were banned from our middle school for a time.

Tape recorders . . . now there's an item that most of us no longer have in our homes. I've clung to an old boom box that has the ability to play both cassette tapes and CDs. My grandson was astounded when we played holiday songs on it in December. To a child whose music source is Siri, he was amazed by these metallic disks that played music when he inserted them into the boom box under my careful guidance. 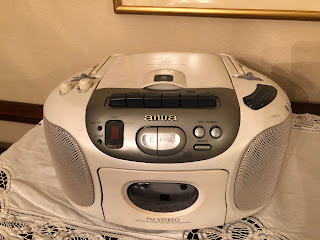 A slice about clackers and tape recorders led me to do a little investigating in my own home. Sure enough, in the top of the coat closet, I located a plastic, white basket of books with accompanying cassette tapes from my son and daughter's childhood. I retrieved the boom box to see if the tapes still work. Fingers crossed! 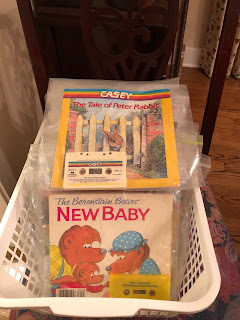 I think grandson Jack would love listening to these voices from his mother's childhood. A quick glance through the bin reveals two particularly relevant books and tapes, The Tale of Peter Rabbit and Berenstain Bears' New Baby (Jack and Robby's new brother will arrive in July).

I carefully slide the first tape into my vintage Aiwa boom box and hope for success. It works, but it's an extremely irritating robot voice who lands on earth from outer space and begins our tale. After a bit of interchange between Mr. McGregor and the robot, it's decided that the actor, George Rose, will tell The Tale of Peter Rabbit to our robot friend who has never heard of Peter Rabbit. Thanks goodness, the robot won't be telling the story! The story is told by Mr. Rose complete with orchestral accompaniment directed by Artur Rubinstein.

When I insert Berenstain Bears' New Baby, there's no irritating robot voice beginning the tale. A lilting voice begins the narration, "You should be on the page where the Berenstain family is crossing a bridge. When you hear this sound (maracas shaking), turn the page." There's snappy music and whistling to begin the story. By the second page, you can hear the trumpet as you view the inside of the bear's house. And the story continues . . .

I can't wait to introduce Jack and Robby to the recorded books their mama loved!

(And my sincere apologies for not being able to provide a link for the clacker and tape recorder slice that inspired this slice. This easily distractible slicer just can't allow herself to follow that thread right now.)